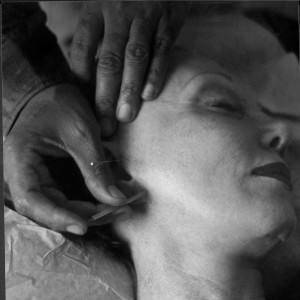 Acupuncture is the wrong word!!!

Ed McMahon (Yes the Million Dollar delivery Ed McMahon) had a lovely younger wife who wanted to stay young and beautiful.  Ed McMahon (God rest his soul) hated acupuncture, but his wife went every week to her acupuncturist in L.A. He waited in the car refusing to even go into the office. One day he had an asthma attack while waiting for his wife (hello smog).  Stumbling out of the car he made his way to the acupuncture office before he collapsed.  The Acupuncturist hearing the commotion immediately came to the waiting room and treated him on the floor and reviving him with two acu-pins.  That made another true believer.  Asked why he never considered acupuncture before Ed replied, it is the name, it’s terrible. Who wants to get a hundred metal objects stuck in their body like Hell Raiser. Even Time magazine’s cover issue on Acupuncture had a woman’s face with twenty needles in it. That was a complete turnoff for me.

So what is a better name? The Chinese call it Jing Luo or meridian therapy. Meridians (luo) are the channels or pathways of electro-magnetic energy called Qi (chi). Since acu-pins are a relatively recent addition to Traditional Chinese Medicine (TCM) it would be more proper to call it Meridian Therapy. Jing is the essence (hormones/bone marrow) along with Shen (mental activity) and Qi that are cultivated and nourished by acupuncture therapy. These are called the 3 treasures of TCM. 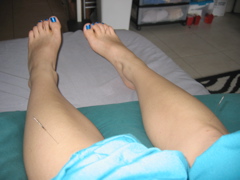 Meridian Therapy has many tools.  Scraping and suction are called gwasha and cupping. Heat and pressure are called acu-moxa. Gong therapy, musical toning and tuning forks are called sound therapy. Magnet therapy and Electric stimulation instruments are more modern.  Red Light (Cold Laser) and Laser are the latest apparatus. These are all tools in the medicine bag. Acupuncture is so limiting as a word and actually turns some people off and creates fear.

According to traditional Chinese medicine, the meridians or channels that form a network of energy pathways that link and balance the various organs. The meridians have four functions: to connect the internal organs with the exterior of the body and the person to the environment and the universe, to harmonize the yin and yang principles within the body’s organs and five substances, to distribute qi or the basic life force within the body, and to protect the body against environmental imbalances. When jing-luo are blocked, Qi and blood cannot circulate resulting in illness.

So Look for Meridian Therapy instead of Acupuncture

What is your Story?
Dr. Love’s real history interview